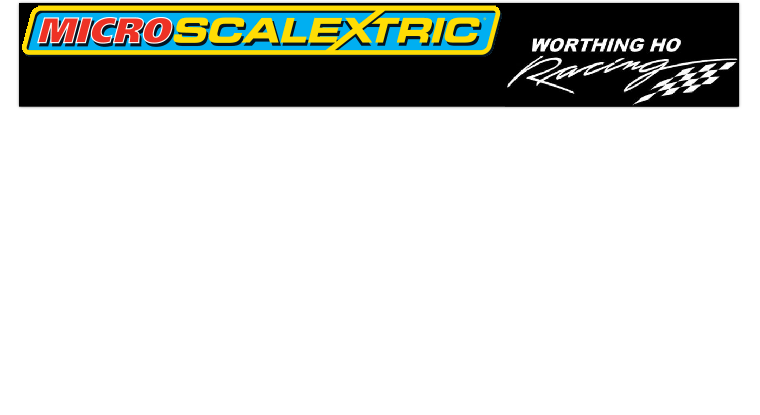 The third round of the 2014-15 championship took place on an oddly chilly August evening. There were twenty on the grid, with some regulars on holiday or doing other things. It was great to see Jamie and Aaron return and to welcome back Hannah and Andrew.

After a busy practice session with the spare cars, the highly-tuned Nissan 350Z race cars were unveiled at 7pm, ready for the heats.

Right from the start it was clear we had a fast track - ideal for the Micro Scalextric cars - with just a couple of tricky technical corners. The main tactical issue would be overtaking - the Micro cars being just a little wide for the Tomy AFX track.

After each driver has completed their first two heats, the scores were very close - you could have thrown a blanket over the field. But the top four had Andrew and Richard tied for pole, followed by Andy and John. Corey was comfortably the top junior.

Most drivers really put the hammer down in the second set of heats. Andy set the top score of the night with a 23.35 in blue, but that was immediately eclipsed by Corey scoring 24.30 in the same lane. Corey's score would remain the best of the night and secured the youngster a place in the B final.

The top four were Dave, Andrew, Ash and Andy. Not for the first time, Richard had a nightmare second round of heats, plummeting from joint top to thirteenth place. However, he was less than four laps behind Dave in pole - that's how close Micro Scalextric racing is at the Barn...

The G final was a face-off between Aaron and Alex. It was a surprise to see them fighting over last place after their battle for the junior medal last time out. Again it was Alex who came out on top, but both had great scores and sub-five second fastest laps.

Alex stepped up into an F final that featured a McCann show-down. Stephen managed to beat his dad, but couldn't hang on to Jonah who took a comfortable win in blue lane. Alex came an excellent third.

Next was the E final, where Hannah looked to move up the order after a disappointing set of heats. Unfortunately for her, Richard and Keith were on great form. Richard had something to prove and controlled the race right up to the final few seconds when he inexplicably threw away a decent lead and let Keith snatch the win. Richard is awesome from 7 to 8pm, but he needs to sort out a strategy to keep going through to 9.30. Coffee? Haribo? A power-nap?

Keith stepped-up into probably the most exciting final of the night. The D final also featured Neil, Jamie and Tyler. The race was so unbelievably close, with the lead being swapped between all four drivers right to the end. When the power went off we had three cars within inches of each other and the other just a few feet back. Tyler won the race by four inches from Keith, Neil's was the car a few feet back and Jamie's just in front of Tyler, but a lap down. Incredible!

The C final was when things started to get scrappy. Usually it's the first few finals that see more crashes and lower scores, but tonight it was the other way round. Paul, Tyler and John seemed to spend more time off the track than on it, leaving Simon to come through relatively unscathed and take the win.

A scrappy C final was followed by an eventful B final, with white lane in the A final the prize for the winner. A crashy first couple of laps saw Andy eek out a half lap lead over Corey, which stayed the same until about thirty seconds to go. An innocuous off at turn one turned into disaster for the club champion when the car body came off. Corey stormed into the lead and coolly took the win. Andy fought back to pip Simon for third in the final seconds. Tony came in fourth, delighted with his evening's work and an excellent B final appearance.

The A final lined up with Dave taking his favourite yellow lane, Andrew in his favoured blue lane and Ash delighted to have red. With Corey also happy to be in white, it looked like anyone could win.

It was a bad start for Corey and he collected Dave and Andrew at turn one on their second lap, allowing Ash to pull out a small lead which he gradually stretched out to a lap. Behind him, Dave and Andrew were keeping up the pressure, but sometimes overdriving and crashing. Behind them, Corey wasn't satisfied with his junior medal and his first A final, he was desperate to get back into the battle for the race win.

With Dave leading the chasing bunch, Ash remained calm and drew on his experience of winning plenty of finals - just not the A final. He drove fast, but not too fast, and kept things clean and tidy. Dave's challenge rapidly disintegrated in the second half of the race and Andrew took over the chase, pulling a few seconds back and then losing them again in a series of crashes. But he kept close enough to put Ash under pressure - would the seventeen year old crack?

The answer was no. In the end, Ash finished three quarters of a lap ahead of Andrew, with Corey pipping Dave for third. Both were delighted with their first wins and everyone at the Barn was delighted for them!

Congratulations to both Ash and Corey, who are now our Micro Scalextric Championship leader and top junior. We'll see if they can hold on to their leads after the Halloween Team Race in October.

And thanks to everyone for making it another exceptionally excellent Micro Scalextric night at the Barn. 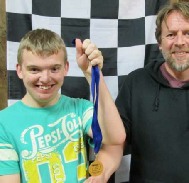 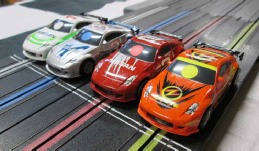 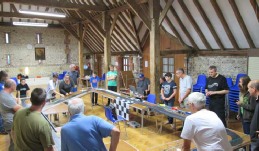 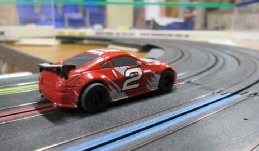 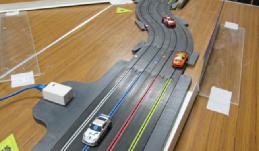 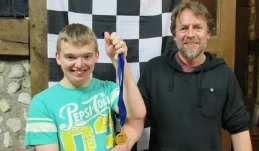 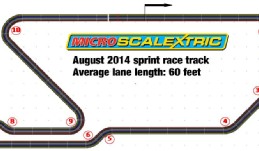 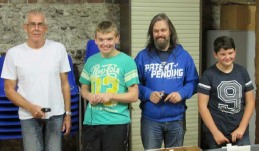 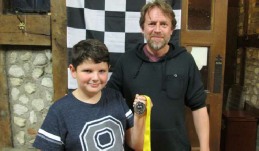