The last HO event at the Barn was 25 months ago. It has been a long wait – and the pandemic isn’t over, just safer… but 21 racers ensured a memorable return. Steve, Isaac and Kevin all raced at WHO for the first time, having got in touch during our prolonged break. They had the prospect of racing the slower WHO Tuners class alongside the Modified cars that are the fastest things we see whizz round the Barn. In total, there were thirteen Mod cars and eight Tuners.

Simon’s track was very fast, but deceptively tricky – pretty much what we’ve come to expect from his designs. Although most people favoured the outside yellow and red lanes, qualifying would rely on getting good results across three of the four lanes. On race control, Ash and Andy introduced WHO to Race Coordinator software – visible to the room via a massive 50-inch screen. Doug from Chesterfield HO Racing Club has helped get the system up and running – and we’ll be using the CHORC rotation while we gradually build our own.

The system got the thumbs-up from racers – each of us having four heats spread through the evening and the chance to race against a different group of people each time. It was certainly sociable and provided plenty of excitement and thrilling heats. Matthew led the way for a while, then Deborah took over at the top of the standings – but it all came down to the final heat to see who’d grab pole position.

Jerome needed 30.4 laps on red lane to jump ahead of Deborah. He was totally fired up – he knew he’d be second, even if he blew it… but it was a brilliant run, the best of the heats by some distance – a 33.50. Deborah did have the fastest lap – 3.171 seconds – and another lap time decided the difference between fourth and fifth. Keith and Ryan were tied on 88.55 laps, Keith getting fourth place with a faster best lap – 3.333 to 3.645 seconds. They’d see each other in the B final.

Kevin and Isaac lined up against fellow rookie Harry in the G Final. Kevin got off to a great start in yellow lane, leading the first four laps… then a painfully long 10 seconds off track dropped him to second. Isaac took the lead from his dad and never looked back. A great performance in red lane improved on his heat score, finishing on 20 laps, 3 laps ahead of his dad, with Harry having battled with the unfavoured blue lane.

Isaac stepped up into that dastardly blue lane for the F Final, joining three more Tuners class Mega-G+ cars. Alan and Ash we in yellow and red lanes, but it was Steve who led the first lap in white. Alan quickly took the lead, but Steve battled Ash for second – a contest that ebbed and flowed throughout the two-minute race. Steve kept his white KFC Ford Fusion club car in front and finished three quarters of a lap ahead of Ash. Isaac had his own battle with blue lane – but, out front, Alan wrapped up a very pleasing win, with his best score and fastest lap of the night.

Alan’s reward was blue in the E Final – which also featured our top two Tuners and a first WHO Mod car. That Mod car was Laurence’s – and he was certainly the favourite in yellow lane. However, Duncan’s top-qualifying Tuner Life Like was looking good in red and led the first two laps. An off dropped Duncan back to third, behind Laurence and Tuners rival Simon – Alan had already been off in blue. Rookie championship leader Laurence pushed on without any errors – leading Simon by a lap at the halfway point and stretching it to just under three laps by the end. Simon had just one off, which was clean enough to keep Duncan behind him and clinch top honours in WHO Tuners for the night.

The D Final was officially WHO Mod country – Laurence joining Mike D, Ned and Pete. There was no messing in this one – Pete led from start to finish, making up for a poor set of heats. Behind him, Mike kept things clean, but couldn’t match Pete’s pace. The battle was between Ned and Laurence. Ned had chosen blue lane, which looked to be a mistake as Laurence got in front and stayed there through half distance. However, a string of errors for the Brighton man gave Ned an opportunity – and he took it, finishing half a lap (2.381 seconds) ahead.

Pete was up to the C Final and had the pleasure of blue lane. Andy in yellow and Terry in red were off like the clappers – an enthralling chase that saw them never separated by more than a second. Andy led the first 16 laps, until he binned his Viper, letting Terry through. Remarkably, Pete had remained close in third and briefly led, but Terry’s pace and consistency paid off in the end – he won, Pete was second, Andy third and Mike McCann fourth.

The B Final was looking tasty – Keith, the Walker brothers and Terry all fancying their chances of a place in the A Final. Keith looked super-determined in yellow lane and shot away into the lead. After ending the first lap in third, Ryan was soon exchanging sub-four-second lap times with Keith – the two of them moving away from Oliver and Terry in blue and white. There was nothing between the top two – and, in the latter stages, Keith began to feel the pressure. Ryan was closing in and Keith had an off – just a quick one, but it was enough for Ryan to get through. The final pass through the line, Ryan led by 0.068 seconds – and that was less that a tenth of a lap when the timer ended. What a race!

Ryan was delighted to step up to the A final and into a nest of Vipers with his rather outdated BSRT G3. And he’d be guaranteed the junior medal – Jerome is now sixteen, although still eligible for junior championship points in this extended 2020-22 season. To be honest, Jerome only has eyes on the race win and the main championships… He’d chosen red, giving Deborah yellow – and Deborah took the race by the scruff of its neck, relentlessly adding a few hundredths of a second to her lead every lap with some incredibly quick times. Behind them Ryan was first to crash. Matthew had a pretty clean race, but just couldn’t match the pace of the top two.

Jerome pegged Deborah back a little around the halfway point, finding pace that had eluded him in the early stages. The gap was big enough – about half a lap -  not to cause the leader too much alarm, although it certainly wasn’t enough to relax or make an error… an off would gift Jerome the race. As the clock ticked down, Deborah crossed the line for the last time 1.75 seconds ahead – and as the cars stopped, that was 0.55 of a lap. The two of them had been driving at 100% the whole way – both smashing the best lap score with 35.95 and 35.4 laps. Deborah’s best lap of 3.063 seconds was the fastest of the night. Just what you want from an A Final!

Huge congratulations to Deborah on her fourth WHO A Final victory and to Ryan on only his second HO Junior medal – I suspect there may be more silverware for both this year. A big thank you to all 21 racers – and to Simon R and Max, who popped in to say hello. Special thanks – as always – to the hard work of the set-up and tear-down crews and to Ash for running Race Control so smoothly.

We’re back with another HO night next month on a Nascar oval. In two weeks, we have our first WHO/digital race for 25 months. Hope to see you for one or both of those Wednesday evenings. 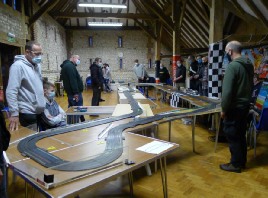 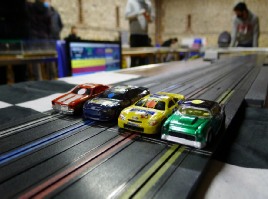 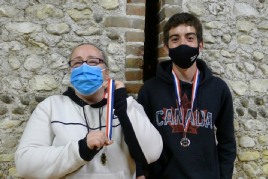 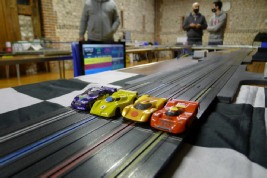