Eighteen racers joined the WHO F1 grid on the eve of a five-day Jubilee holiday. It was decided we’d race on a British Grand Prix layout – and our re-tweaking of Donington Park was chosen. This track has a big footprint, taking up most of the Barn and allowing for some fast, flowing action – plus some tighter corners that would test the Mega-G+ cars. There were also two Classic Cup Viper-Jets on the grid – Mike D and Andy taking on the challenge of running with brass weights rather than traction magnets. And from their heat results, you can see it was a considerable challenge.

Up front, the racing was incredibly close through the heats, racers separated by just a few tenths of a lap. For a while, it looked like Jerome would notch up another pole position, but he was leap-frogged by Keith, Pete and Deborah – meaning he’d have to win the B final to meet those three in the feature race. Kevin, Isaac, Oliver and Mike McCann had all been on the pace during the heats and the top eight all scored totals of over 60 laps in their best 3 lanes. The next seven were covered by ten laps – and then the two Classic Cup runners brought up the rear, separated by Terry’s mis-firing Mega-G+. Those three would start the finals.

Three unfamiliar faces in the F Final… Andy and Mike fully expected to be there – but Terry did not. His Mega-G+ is usually an A Final car, but petered-out after about a minute of each of the heats. He did have the option of a spare in the final, but hoped one last tweak would see him through and work up the order. It started well for Terry, but his car ground to halt after 6 laps – requiring marshals to push him round for a stuttering bonus circuit. And then he retired. Andy took the lead in the smoother of the two Viper-Jets – and eventually finished four laps ahead of Mike.

That put Andy in the inside White lane for the E Final – up against the Mega-G+ cars of Ash, Matthew and Laurence. Matthew took the lead from the start. Despite some early pressure from Ash, he kept it clean and continued to pull away as Ash and Laurence battled for second. That was an exciting battle – only decided by a late off for Laurence allowing Ash to relax on a lead of just under a lap. Matthew won by a lap and a half – Andy was two laps adrift of Laurence.

Matthew was happy to step up to blue in the D Final. The two inside lanes were not the first choice, although Simon had chosen white for this final, ahead of yellow. And he made it work. Off the line, it was Matthew who took the battle to Ryan, until and off promoted Simon to second and Daniel to third. Ryan controlled the race from the front, putting in a string of very consistent mid-five second laps to build up a lead of just under a lap. Meanwhile, Simon and Matthew were battling side-by-side for second – and exciting tussle that was decided on the penultimate lap… Matthew crashed. Ryan won by 0.95 of a lap from Simon, who was 0.70 of a lap ahead of Matthew – Daniel a couple more laps back in fourth.

Ryan moved up into the first group of 40+ qualifiers in the C Final. They proved a little too hot to handle for the junior in blue lane. This race was the best of the finals so far – Kevin, Mike and Aiden trading places, swapping the lead and rarely more than a few metres apart. They each had one crash – Kev on the first lap, Aiden on the second and Mike on the fifth. After that, they kept it clean and their lap times dropped. By half distance, Kevin had the lead, with Mike and Aiden extremely close. The rookie opened the gap by a few tenths a lap until he was a whole circuit ahead – it would, of course, all disappear if he crashed… But he didn’t. Behind Kev, Mike was being hunted down by Aiden – closer and closer, the youngster passed just before the end to take second place by the smallest of margins. Ryan was only a lap back in fourth.

That put Kevin into the B Final, where he’d face Jerome, Oliver and Isaac. This was another exciting race – rather more scrappy than the previous final, starting with another first-lap off putting Kevin on the back-foot. Isaac held the lead, with Jerome and Oliver snapping at his heels. An off for Oliver then made it a two-car race for the win – Isaac and Jerome both looking extremely focused. Kev was fighting back and had Oliver in his sights, before a late crash dropped him half a lap back. Up the road, Isaac and Jerome were having a brutal battle, with Jerome’s pace dropping off a little and Isaac then building a comfortable lead. A late scare for Isaac wasn’t enough of a chance for Jerome – the winning margin was three-quarters of a lap.

The A Final looked extremely tasty – it was anyone’s to win. Isaac already had the junior medal and top rookie honours, but he had to be in with a shout. Pole-sitter Keith had chosen white lane, but was off like a rocket, pulling a decent lead in just the first two laps. Then disaster struck – an off dropped him back to last place. It was Deborah who took the lead – and was super-fast, immediately pulling a gap on Pete and Isaac. Lap six and Deborah was off, dropping to the back and Pete inheriting the lead. He was also banging in some very rapid lap times… but he kept it clean and maintained a decent lead to Isaac in second.

Both Deborah and Keith were driving hard to make-up ground, but they’d need the guys ahead to have problems. Keith binned it again, but then so did Isacc – twice in two laps. Deborah climbed to second and was cutting into Pete’s lead by a two tenths a lap – but it was still a big gap. Keith was also quick and closing in on Isaac. As the clock counted down, two crashes decided the outcome of the race… Deborah’s charge was halted and two laps lost. Then Isaac handed a similar amount of time to Keith, who was suddenly through into second – although two laps behind the leader. That’s how it finished – a great win for Peter, second by half a lap for Keith and then Deborah three-quarters of a lap ahead of Isaac. Exciting stuff from all four A Finalists.

As always, a big thank you to everyone who came along – especially to the set-up crew and to everyone who stayed to help pack away. Ash did a brilliant job on race control – and we had a first problem-free run with Race Coordinator, including a perfect half-time look at the standings. Thanks to Doug for helping us get the new software running nicely.

We have a three-and-a-bit week break to recover from the holiday – and then we’re back with our first Digital Saturday of 2022 on 25 June. That’s followed by a WHO Mod race on Wednesday 6 July. And finally, good luck to everyone who’ll be finishing off their GCSEs and A Levels between now and then. 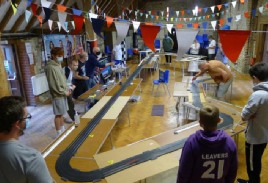 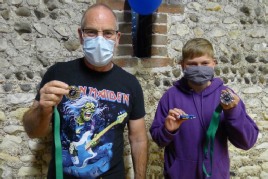 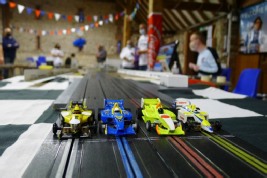 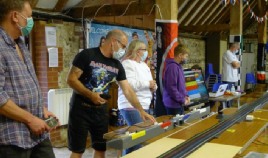