The last time we raced our HO Nascars was at the club’s tenth birthday celebrations in February 2020. For our return to HO oval racing, eighteen of us used a four-lane replica of Langhorne Speedway – one of the Nascar heritage tracks that Keith and Deborah chose for our birthday year. Langhorne was a regular venue in the early days of Nascar, falling off the schedule in 1958 and then closing in 1971 to make way for a Philadelphia retail complex.

A mid-size oval by WHO standards, our 45-foot Langhorne tribute may well become a regular feature at the Barn – it was an exciting track to drive across all four lanes, although some racers found the inside yellow lane tricky. Driving an HO oval requires a subtly different skill set to our usual circuits and Vicky was thrown into the deep-end with yellow lane in her first ever heat at the Barn! It wasn’t a great two minutes, but she recovered well and was close to the Gen6 pace on the other three lanes.

Isaac – another Nascar first-timer – took to oval racing like a natural. It did help that his new Mega-G+ car and tyre combo was perfect for the layout, yet he made the most of it. Three heats of 38 laps on red, blue and white meant a patchy run on yellow didn’t count. Remarkably, that made Isaac top Gen6 qualifier, top under-16 and top rookie. However, Ryan qualified just behind Isaac, so that would be quite a battle in the finals, with Terry and Ash certainly capable of challenging for Gen6 honours.

In the race for top qualifying spot, there were some very rapid heats – Race Coordinator mixing things up nicely so each heat had a different line-up. Eight racers managed 40 laps in at least one heat – and the top four had a clean sweep of four 40+ lap runs. Jerome’s score of 46.60 in red put him on pole, although Andy had best scores in yellow and blue, with Mike topping the charts in white. Those three were the automatic qualifiers for the A final.

Kevin, Laurence and Vicky met in the F Final. It was a bit of a crash-fest early on, with Kev the first to leave the track. As the race settled down, all three drivers put in some great laps, their cars often lapping in formation – Vicky in red, Kevin in blue and Laurence in white. However, it was minimising errors that gave Laurence a lead that he held to the end – finishing two laps ahead of Kevin and Vicky six laps further back. All three drivers improved significantly on their scores for those lanes in qualifying – and you can’t ask for more than that.

The E Final saw Laurence step up to yellow lane, where he’d face the Gen6 cars of Ash and Terry, plus the Super-G of Deborah. Last month’s WHO Mod winner was having a bad evening – Deborah had damaged her car early on and it had been frustratingly unpredictable in the heats. Sometimes super-fast, but struggling to stay on the track. Would things change for the finals? It was certainly a better two minutes, but Terry set an incredible pace and relentlessly pulled away. His winning score of 41.25 was only bettered in the B and A finals. Deborah finished four laps behind – just ahead of Ash – and Laurence struggled to hang on in fourth.

Terry would have to conjure up another win in the D Final to have a crack at Isaac for the Gen6 race win. That’s exactly what Ryan was aiming to do – and to go for the junior medal too… but both would need to get past Keith and Duncan with their Super-G+ and Life Like T. It didn’t start well for Duncan – his Life Like stalling on the start line. He was soon back in the fray, albeit a nearly a lap down on Keith, although almost on terms with Ryan, who’d binned his car coming out of turn three. Keith set a blistering pace in the outside lane, Terry was more circumspect in yellow. Duncan and Ryan had a great battle – both enjoying a few too many errors to worry Keith. It looked like Ryan had done enough for runner-up spot, but a final lap crash let the Life Like through to finish a third of a lap ahead – much to Duncan’s delight!

Keith stepped up to yellow in the C Final, where Isaac was under no pressure – whether he knew it or not, he’d won Gen6, had an automatic place in November’s Gen6 championship showdown race, plus he had the under-16s medal and was top rookie for the evening. Against three Super-Gs – driven by three WHO race winners – he got on and banged in another great performance. As all around him crashed, Isaac motored round the outside white lane. Pete was having a nightmare in blue lane, Simon and Keith gradually got things together in red and yellow… but could they beat Isaac? In the end, Simon did – finishing less than a lap ahead. Isaac was congratulated for a fine second place, with Keith a strong third and Pete fourth.

Up in the B Final, Simon would have a big task to challenge Matthew, Oliver and Mike McCann – who’d been clearly ahead of the rest of the field in qualifying and not too far off the top three. This was a fast, close and mostly clean race. An early off for Matthew did put him on the back foot, but he fought back from losing the inevitable lap or two a crash costs on this track. Mike had chosen yellow and was putting on a great show, but it was Oliver in blue who was leading the way – Simon trying to hang on to the pack. As time ran out, Oliver finished on a huge 44.65 laps, Matthew was just under a lap back, Mike two laps behind and Simon five laps off the leader.

After a couple of abortive starts, the A Final was underway – an equally fast, but rather more chaotic race. Pole-sitter Jerome led the early stages, but Andy reeled him in and passed on lap 10 and set about opening up a lead. The leading pair were setting the fastest pace of the night, dropping into the low 2.4 seconds. Coming up to half distance, disaster struck for the leader. Passing Oliver on the inside, Andy’s car left the track and lost a lap to Jerome. Down, but not out, Andy banged in sixteen sub-2.4 seconds – the fastest of the night. Jerome could see him closing, but with only 30 seconds to go, the leader kept his cool.

Nascar A Finals are known for their carnage – and this time it was Mike tumbling out of yellow lane that decided the race. He caught Andy’s car and the chase was over – despondency set in and a string of scrappy laps on dirt tyres allowed Mike through for second, three laps behind Jerome. That was another exciting Nascar A Final to mark our return to oval racing at the Barn – and a superb performance from Jerome to pick up another winner’s medal to add to his growing collection. With five races gone and seven to go, it looks like the youngster could be taking home a lot of silverware at the end of the season.

A big thank you to everyone who came along and raced, marshalled and made it such an enjoyable evening at the Barn. Special thanks goes to the set-up and tear-down crews – and especially to Ash, who ran race control magnificently. We’re back in two weeks for another Digital Wednesday. Our next HO action is a Diamond Jubilee Formula One race at the start of June… The perfect way to start a five-day holiday. 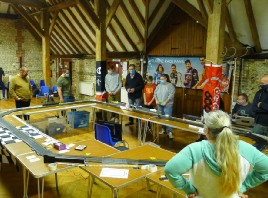 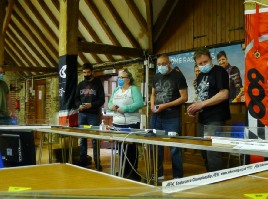 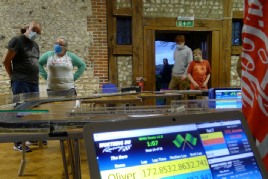 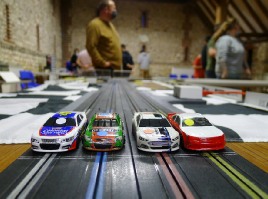 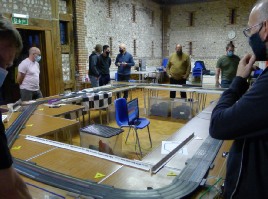 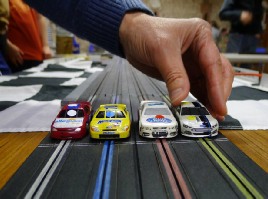 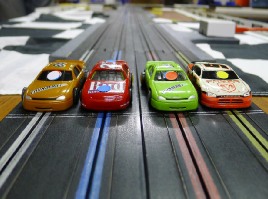 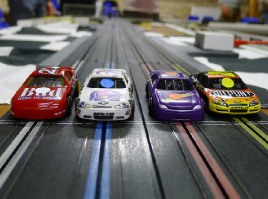