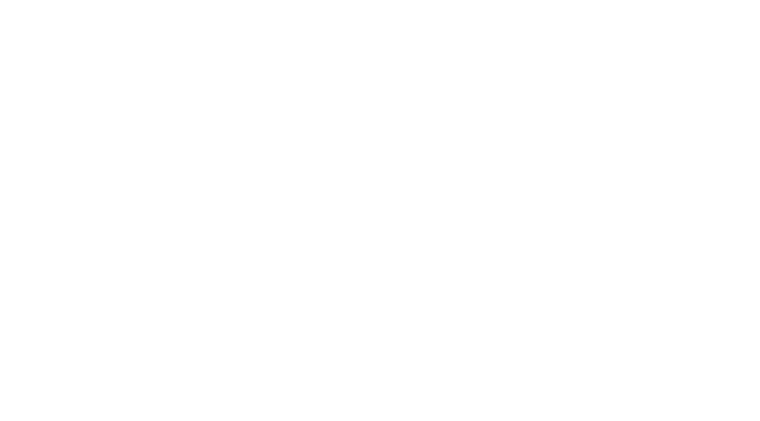 The Worthing HO Racing website is licensed under a Creative Commons Attribution 3.0 Unported License (except where otherwise noted) 2012-20

The first WHO/digital Wednesday of 2020 saw twenty-five people take to the grid for a Nascar club car team race and a Trans-Am pairs race. The results, RCS64stats and some pictures are on the right, plus there’s a video over on YouTube. Championship tables are on the 2020 season page.

Twenty-five racers took to the WHO/digital grid for the start of our seventh year of Scalextric digital racing at the Barn. Charlie and Ed both made their WHO debuts and it was a first Digital Wednesday for Harry and Alan. Simon’s fabulous track went together quickly and easily and we were up and running in record time – ready for practice and Mike’s Digital Driving School. Ed arrived too late for any instruction and decided to look and learn. That left us six teams of four in the Nascar club car team race.

With some new and new-ish racers on the grid, we started with just the RCS64 fuel simulation. That got the teams working together and drivers back in the swing of the pit stops – which come thick and fast. Team Two – captained by Ryan – started with the red Coca Cola Taurus and they were heavy on the throttle, stopping nine times in the twenty minutes. But they were also quick, setting the best score of 73 laps, a lap ahead of Alex’s Team One and Oliver’s Team Three. Team Five – Daniel, Ash, Matthew and Mike McCann – finished on 69 laps, alongside Team Four – Jerome, Dean, Steve W and Gary. Team Six – Harry, Simon, John and Rob – scored 67 laps, six behind the leaders.

For the start of the second twenty minutes, the teams swapped cars – first with sixth, second with fifth and third with fourth. The RCS64 tyre wear simulation was added, so teams would need to keep an eye on both tyres and fuel and call the driver into the pits. It was a familiar outcome. Team Two – Ryan, Mike D, Graham and Charlie – led the field by one lap, scoring 72 laps this time. Team Three – Oliver, Andy, Peter and Alan – just beat Team One – Alex, Alex, Terry and Steve C – to the line to both score 71 laps. That left them level-pegging with the final segment to come and just two laps behind the leaders.

Jerome’s Team Four were fourth on 68 laps, Harry’s Team Six fifth on 64 and Daniel’s Team Five finishing with 62 laps. Their battle would be for fourth place. The top three teams all stopped seven times in this segment – Oliver’s team spending the least time in the pits, 67 seconds compared with 112 seconds for Team Six. That difference could be worth five or six laps. Slick pit work does make a difference.

We threw some weather changes into the mix for the final twenty minutes – the track starting dry, with rain turning it damp and then wet. But when those changes would happen was anyone’s guess. The teams would have even more data to process and strategy would be vital. The rain came after eight minutes and teams switched from Hard tyres to either Intermediates or full Wets. Leading the way after ten minutes was Alex’s Team One, running a lap ahead of Ryan’s Team Two and Daniel’s Team Five – all three on the Inters. Three laps back were Jerome’s Team Four and Oliver’s Team Three on Wets. Harry’s Team Six were another two laps adrift, also on Wets.

By the next pit stop, the track had got wetter and all the teams had switched to Wet tyres. With low tyre wear, pit stops would be fuel-only from now on. It looked like we had a battle for the race win, but Team Two got stronger as Team One faded. Oliver’s Team Three also rallied, picking their way through from fifth to third and then catching up to Alex’s Team One car in second. With the Team Two car stretching their lead to three laps (five overall), the big battle was for the runner-up spot. On a Wet track, strategy was all about quick fuel stops, staying on track and not running out of fuel. In the end, Oliver’s team pipped Alex’s to second place by two laps. Daniel’s Team Five finished strongly, just a lap behind, with Team Four and Team Six coming home in fifth and six in the segment – although Team Five finished fourth overall.

Huge congratulations to Ryan, Mike, Graham and Charlie on their win. Charlie is not the first racer to win on debut, but it is a pretty special feeling. Team photos and medal presentation completed, it was time for Trans-Am…

Harry, Alan and Daniel departed, leaving us one driver short for eleven pairs. Finally, we managed to twist Ed’s arm to have a go. He partnered Simon in the Brut Boss Mustang. New on the grid was Dean’s black and silver 1969 Camaro, which he shared with Alex. Otherwise, the rest of the cars were familiar – seven Camaros, two Mustangs and two Javelins. In terms of slot car manufacturers, nine Scalextric and two Pioneers.

The first ten-minute qualifying heat looked to contain the cream of the crop. Mike and Graham gradually built a comfortable lead, only for Mike to run out of fuel late on and end up just a few yards ahead of Ryan and Oliver in second. John and Alex made it a ‘71 Camaro top three, just a lap back on 40.5 laps. Peter and Jerome weren’t far behind in their Pioneer Camaro, just ahead of Dean and Alex on 39.50. Simon and Ed rallied well to finish on 33.75, but that probably wouldn’t be enough to make the top six and the feature race.

The second qualifier was rather more chaotic and lower-scoring, with one exception... Ash pulled away in the blue and yellow Javelin, before handing over to Andy – their 41.75 grabbed pole for the feature race by a quarter of a lap. Behind, the other four pairs struggled. Rob and Terry looked strong early on in the #1 Javelin, but dropped back and finished in fourth, just behind Steve C and Charlie’s Dadson Camaro. Ahead of both cars were Matthew and Gary in the orange Camaro – their score of 35.75 not enough to break into the top six, but they would start in pole for the consolation race. Mike and Steve W would start last in the Pioneer Mustang.

The mad five-minute dash lived up to expectations. The frantic sprint to the driver change pit stop was too fast for the Camaros of Matthew and Gary and Steve and Charlie – they would need to stop early and waste time with a second visit to the pit lane. It was the tail-end Charlie’s who played the perfect strategy – despite the slowest fast lap, Mike and Steve W hit the finish line first. Also finishing on 19 laps were Simon and Ed, who started second-to-last on the grid and set the fastest lap of the consolation race. Matthew and Gary were third, two laps behind. Steve and Charlie beat Terry and Rob for fourth place, three laps behind the winners.

If any extra spice was needed, we added some weather changes to the feature race. The track was wet at the start and forecast to dry out by the end. Graham was first away, but an early off dropped him to third, behind Ryan’s Camaro and Ash’s Javelin. Jerome jumped the start and the stop-go penalty put his Pioneer Camaro a lap back. As the first round of fuel stops cycled through, the order was still Ryan, Ash, Graham, Alex S, John and Jerome. However, as John came in to pit last, Ash was right behind him and got dragged into the pits too. This dropped the Javelin back to fourth and a lap behind Ryan.

By now, the rain had stopped, but the track was still wet. When the sun came out – about a minute before the driver change – the track started to dry rapidly. Did anyone notice this? John had already changed to Intermediates at the first stop and was lapping quickly. At the driver change, Andy and Alex S both fitted Inters, but both Alex F and Oliver gambled with Hards. Mike took Intermediates, Peter staying on Wets. Yet, with four minutes still to go, the track was nearly dry.

Oliver held a decent lead over Mike, with Alex S third, Alex F fourth and Andy just behind in fifth. With two and a half minutes left, Oliver made what would be his final pit stop, gifting the lead to Mike, who would pit the next lap. Oliver changed to a new pair of Hard tyres and Mike staying on the same pair of Inters to save a big chunk of time in the pits. After those stops, Mike held a slim lead of Oliver, Alex S was two laps back, with Andy fighting off John a further two back. Meanwhile, Peter had huge car troubles, the bonnet had come off the Camaro earlier in the race and everything underneath was sounding rougher and rougher.

The final minute was intense – Mike hanging on out front with Oliver snapping at his heels as his Intermediate tyres wore out and his braking points got longer and longer. If Oliver could keep calm and focused, it was only a matter of time before he’d get past. The pass finally happened with about twenty seconds to go… Mike’s tyres were in the red and fuel down to 17%. With Alex a long way back, Mike coasted it round to finish second. In fact Alex S was nearly caught by Andy and Alex F’s battle – a late pit stop for the Ferrigno Camaro dropping them to fifth at the line.

The were celebratory scenes at the end of the race, Oliver and Ryan utterly delighted by their win – which was hugely deserved after an almost flawless performance in both the qualifying heat and the final. Their driving and strategy was the best on the night.

And that was it – the end of one of the best Worthing Digital Wednesdays so far. Huge congrats to all our winners and a big thanks to everyone for coming along and making it such a fun and competitive evening of racing. Special thanks goes to the set-up crew, to all those who stayed to pack up and to Daniel and Ash who did a brilliant job on race control. And thank you Mike D, without whom we’d never had started our digital racing at the Barn.

We’re back for another Digital Wednesday next month – on 19 February. 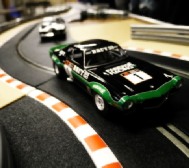 After the event, you’ll be able to click on the logos to watch the video and follow the discussion. 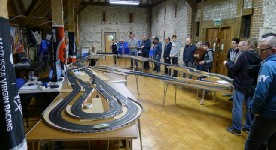 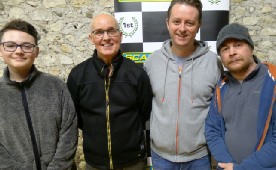 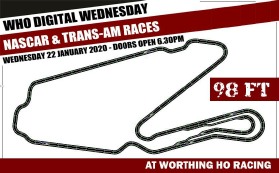 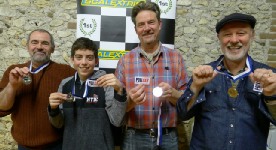 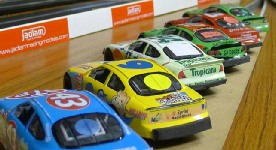 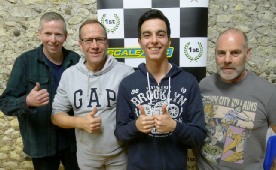 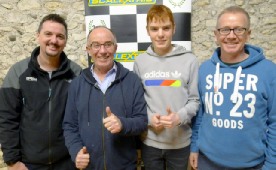 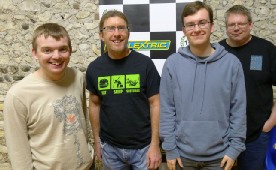 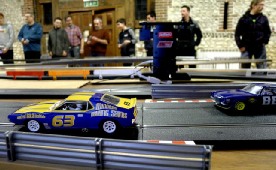 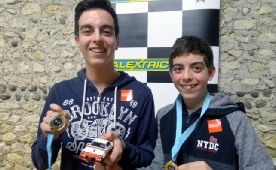 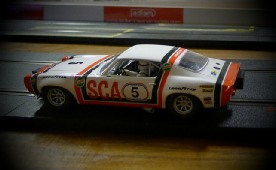 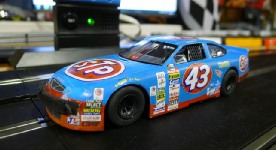 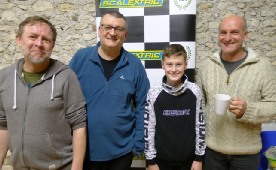 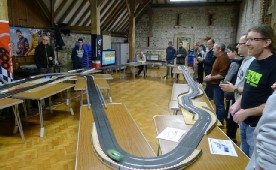 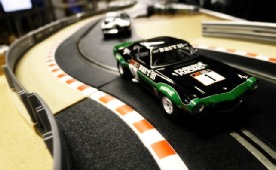