The idea behind our first HO Saturday was to race some chassis and formats that we don’t normally see at the Barn. Exactly what we ran would depend partly on what people brought along, but the two feature races would be a Viper V-Jet team endurance race in the afternoon and a pancake race in the morning.

A big set-up crew of WHO racers was joined by Alan, who was visiting from out west and brought boxes of cars to try, including two V-Jets to make up the endurance race grid. Together, we built a 4-lane AFX track and a scale quarter-mile drag strip and we were ready to race. A gentle crash ‘n’ burn X-Traction race warmed us up as more racers began to arrive.

Keith won that first race with four consistent drives and four fastest laps. Then it was on to the drag strip to run some of Duncan’s superb collection of Auto World Racing Rigs. Mike and Deborah fought their way through to the final, where Deborah took the spoils.

That had everyone nicely loosened-up for the morning’s feature race, a typical WHO heats and finals race using Auto World X-Tractions on all lanes apart from white, where there was a feisty old Aurora Magnatraction. This race was part of our club joining the worldwide celebrations of Super Tires twentieth anniversary and all the cars were shod with the new round-walled 474R Super Tires.

It would be true to say that those who’d raced in the earlier warm-up race had an advantage in the heats. Dave, Rachel, Sharon and Sean joined us a little later and took a while to get to grips with the characteristics of the pancake cars. But everyone was going well by the end.

Taking racers’ best three heats as the qualifying score saw the top five finish up very close. In pole position was Andy, followed by Mike, Simon, Alan and Keith. Duncan, Deborah, Dave, Sean and Rachel followed a bit further behind. Sharon was further adrift, but not last. John arrived too late for the heats, but was handed a wild card for the finals, to start last with no practice whatsoever.

Rachel gave John a run for his money in the D final. The youngster ran well, beating her mum, but it was John who came out on top and stepped up to white lane in the C final. There he had a good scrap with Deborah, who fell away towards the end. Dave and Sean had an even better scrap for the third, with Sean looking like he’d beat his brother-in-law, but it all fell apart in the final couple of laps.

John was in white lane for the B final too. This turned out to be an amazing four-way race. It’s hard to say exactly how, but the pancake cars certainly gave us a different racing than the usual WHO fare. The back and forth in this final was exciting stuff. All four racers seemed to have it in the bag at one point, but then lost ground while others kept it clean and crept up under the radar. And that’s pretty much how John ended up the winner.

Which meant John moved up to in white lane for the A final. It was the other three who shot off into the lead and then it was just chaos, with perhaps the adrenaline pumping a little too much. Simon was off, then Andy dropped back permanently, Mike was in the lead, then back to third and it looked like John would win the race having qualified right at the back of the field. But there was plenty more drama packed into the two short minutes and with the seconds ticking down, any one of John, Mike and Simon could have won it. As the chequered flag fell, Simon was the victor!

That gave us time for another drag race before a quick break for lunch. We used Alan’s Tomy Turbos - prepped for the Derby Le Mans race - and it was Alan who pipped Deborah for the win in the final.

We said goodbye to Duncan at lunchtime and hello to Aiden and Alex. Aiden, Alex, Rachel and Sharon helped pick teams for the 2-hour V-Jet race. It would be the longest race ever at the Barn and the first time we’d raced the brass-weighted cars competitively. The V-Jets are essentially a Viper car with the traction magnets replaced by brass weights and a couple of little weights added to the front of the chassis. They’d be quicker that the morning’s cars, but would require caution in the corners just the same.

After the teams were picked and Mike and Alan returned from the chippy, the race began. Each team raced for half an hour on each lane, with driver changes at ten and twenty minutes. Each car stayed on the lane allocated to it. The early going suggested things would be very close. However, disaster soon struck Aiden’s team ‘Lean & Dabb’. A heavy crash saw the car lose both weights and only one was recovered. The car stayed off track while the search went on, but to no avail. Although the car returned with one magnet, the team lost dozens of laps.

A spare weight was fitted to the yellow car after the first half hour, which saw Rachel’s ‘Sparkles’ hold a one lap lead over Hot Wheels. Lean & Dabb won the second half hour, but were still forty laps adrift of Sparkles, who now lead Hot Wheels by five laps and Alex’s ‘Speed of Magic’ by ten. That was a pretty close top three after an hour of racing.

Sparkles and Hot Wheels upped their game in the third half hour, setting huge scores of over 260 laps and leaving the other two teams in their wake. It set up the final stint with Sparkles’ lead a mere six and half laps. The two teams raised the pace even more with the race win in sight. Sparkles eked out their lead ever so slightly leaving Rachel racing Simon for the final ten laps. Rachel was driving smoothly and defending the lead as well as she could... But Simon was driving incredibly fast and consistently.

Sparkled lead dropped a little lap by lap until, with about a minute to go, Hot Wheels took the lead and Simon just had to bring it home. As the chequered flag fell, Hot Wheels had broken the thousand lap mark and won by just under five laps after two hours of racing. A very excited and proud Sharon and Deborah won their first WHO medals. Simon and John already have a few edals between them, but they were stoked too.

One more drag strip race saw Deborah end up queen of the quarter-mile. Three finals and two wins weren’t bad going... And that was it - the end of our first HO Saturday. It went like a flash, but seemed to work - a fun day running different stuff. A big thanks to everyone who took part and helped make it such an excellent day. Let’s see if we can squeeze another one into the calendar for 2017. 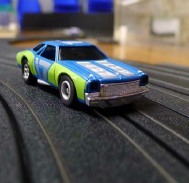 All the race results are below, click images to enlarge. 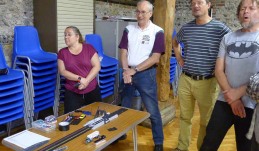 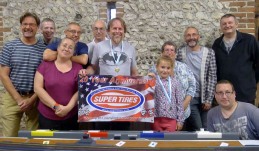 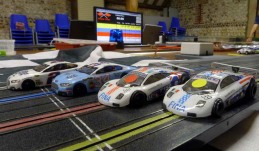 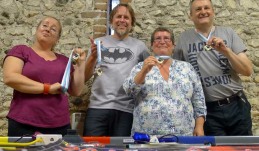 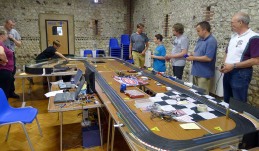